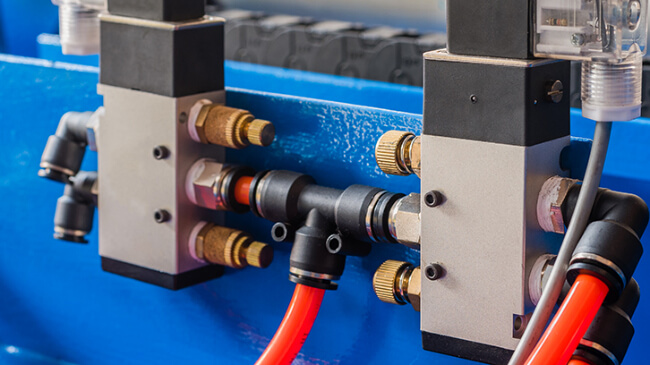 In order to control the pressure, rate, and amount of air moving through a pneumatic system, there are a number of basic types of valves. As in hydraulic systems, where fluids transfer energy, pneumatic systems use air to do the same thing.

At the “heart” of any pneumatic device are one or more valves that control the transfer of power from one point to another. The functionality of the device determines the type of valve(s) used.

Here is a summary of the main types of pneumatic valves in use today:

This type of pneumatic valve classification refers to the manner in which air-flow direction is switched. For example, in a two-way directional valve, the valve either opens (air-flow is enabled) or closes (air-flow is prevented). In order for each port to assume an open or close position, an actuator moves a valve spool into position. To release the valve spool and return the pneumatic valve to its previous position, a spring releases the spool. A two-way directional valve that functions in this manner is a spring offset valve.

In two-way directional spring offset valves, there are two positions they can assume when the connected actuator isn’t active: open or closed. With devices where an open resting position is standard, air moves freely through the valve. For a closed resting state, the air-flow is blocked. On three-way valves, one port is always open. In such cases, a closed resting state usually results in blocking the air-flow port, so the pressure isn’t moving unless the device is turned on.

Many functional directional pneumatic control valves are classified based on the number of entry and exit ports they possess, the number of flow paths they create, and the mechanism by which ports are opened and closed.

A three-way directional valve has three ports, each of which serves a different purpose. The first port is used to connect the valve to an actuator or another device. The second port is connected to an air-flow. The third port is used as an exhaust exit. When the first and second ports are open and the third is closed, air moves through the valve to the device. When the first and third ports are open and the second port is closed, the actuator can vent exhaust. Three-way valves are often connected to actuators in cylinders, or used in pairs and connected to double-acting cylinders.

A four-way directional valve has four distinct ports, two of which connect to actuators, one that connects to a pressurized air-flow, and one that serves as an exhaust pathway. They are among the most common types of valves found in pneumatic systems because the four distinct paths allow the valve to effectively reverse the motion of a motor or basic cylinder. An additional port is sometimes added to a four-way valve, making it a five-ported four-way valve. A four-way valve with an additional port is often used to provide dual pressure, meaning the valve can apply one of two kinds of pressure and alternate between the two depending on what the application requires. Alternatively, the valve can use the other port as a secondary exhaust port.

For more information about valves, contact Diffley-Wright at; (800) 282-4886. We are the exclusive distributor in Florida for Humphrey valves, and are equipped to meet all your needs!